A Countess from Hong Kong 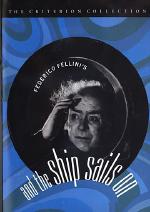 A uniquely Felliniesque ocean voyage, circa 1914, with a journalist (Freddie Jones) acting as our ho...