Based on the acclaimed radio program this stylized thriller features Barbara Stanwyck in her Oscar nominated performance as the young, rich, bedridden wife of Henry Stevenson (Burt Lancaster), who after dialing a telephone number and overhearing a murder plot, becomes frantic. Her terror is intensified by mysterious calls from an old friend of her father and with time running out, she begins to suspect her husband wants her murdered. 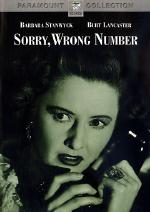